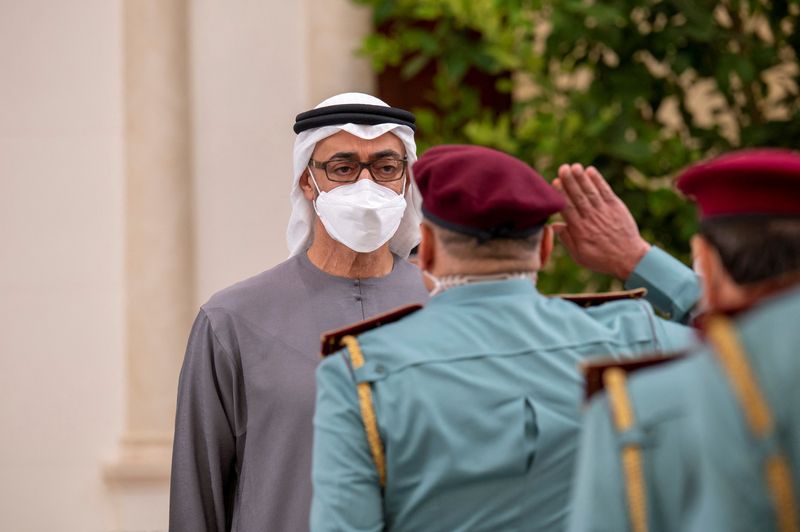 DUBAI (Reuters) – World leaders began descending on the United Arab Emirates on Sunday to offer condolences on the death of President Khalifa bin Zayed al-Nahyan, who was succeeded by his half-brother and de facto leader Sheikh Mohammed bin Zayed.

French President Emmanuel Macron, whose country holds lucrative business and military ties with the UAE, arrived in Abu Dhabi and in a Twitter (NYSE:) post paid tribute to Sheikh Khalifa’s “values of peace, openness and dialogue”.

The president of Israel, with which the UAE forged ties two years ago in a major realignment of the Middle East, drawing Palestinian ire, was also due on Sunday as was the Palestinian president and Britain’s prime minister.

U.S. President Joe Biden, whose administration has had fraught ties with the UAE and Saudi Arabia, will be represented by Vice President Kamala Harris, due to visit on Monday.

Sheikh Mohammed, known as MbZ, has been a driving force in Middle East politics, championing Saudi Crown Prince Mohammed bin Salman in the West as he rose to power and combating political Islam, seen as a threat to Gulf dynastic rule, around the region.

MbZ deepened ties with Russia and China as Gulf states increasingly questioned the regional commitment of traditional security guarantor the United States. Strains in U.S.-Emirati ties were highlighted by the Ukraine conflict as Gulf states refused to side with Western allies in isolating Russia.

After years of enmity Abu Dhabi has also moved to engage with Iran and Turkey as the UAE doubles down on economic growth amid rising regional competition and a global push away from hydrocarbons, the lifeblood of Gulf economies.