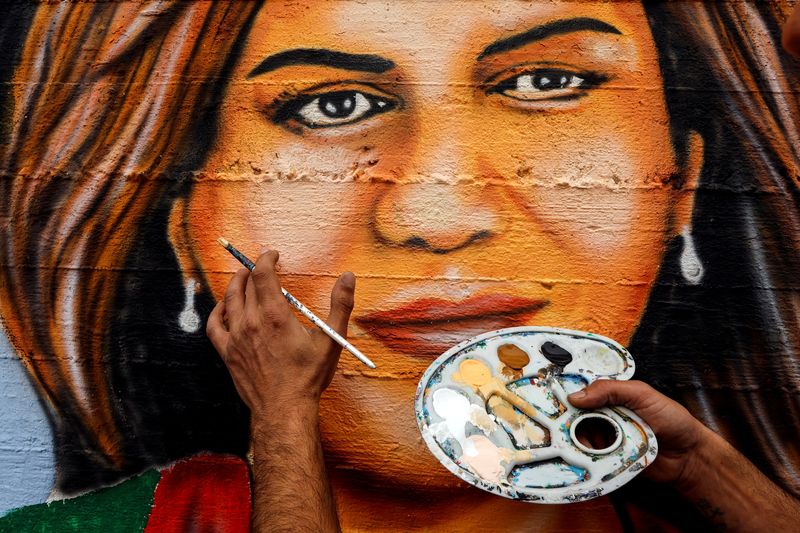 © Reuters. Artist Jaber Abbas, 35 years old, applies final touches to a mural that he painted to pay tribute to Al Jazeera journalist, Shireen Abu Akleh, who was shot dead during an Israeli military raid in the occupied West Bank, in Nazareth, Israel May 16, 2022. R

WASHINGTON (Reuters) -A group of 24 U.S. senators on Thursday urged President Joe Biden to ensure direct U.S. involvement in the investigation of the killing of an Al Jazeera journalist who was covering an Israeli raid in the occupied West Bank last month.

The lawmakers, all of them Democrats plus two independents, called for “a thorough and transparent investigation under U.S. auspices” into the shooting death of Shireen Abu Akleh, a Palestinian-American reporter, in Jenin on May 11.

Israeli and Palestinians officials have exchanged recriminations over the incident, which has heightened tensions.

“It is clear that neither of the parties on the ground trust the other to conduct a credible and independent investigation,” wrote the lawmakers, led by Senator Chris Van Hollen, in a letter to Biden, who is due to visit Israel in July.

“We believe the only way to achieve that goal is for the United States to be directly involved,” they wrote.

A spokesperson for the White House National Security Council said the United States is not conducting an official investigation” but urged both sides to share evidence with each other. “We expect full accountability for those responsible,” the spokesperson added.

The Israeli embassy said Israel conducted a thorough inquiry and “continues to call for an investigation with the United States in an observer role.”

The Palestinian Authority said in late May its investigation showed Abu Akleh was shot by an Israeli soldier in a “deliberate murder.”

The Israeli military concluded “unless the bullet is handed over, it is impossible to determine which side fired the fatal shot,” but the Palestinian Authority has refused to do so, the Israeli embassy said.

It denied any Israeli soldier “targeted a journalist.”

The Israeli army had said shortly after the incident that Abu Akleh might have been accidentally shot by one of its soldiers or a Palestinian militant in an exchange of gunfire.