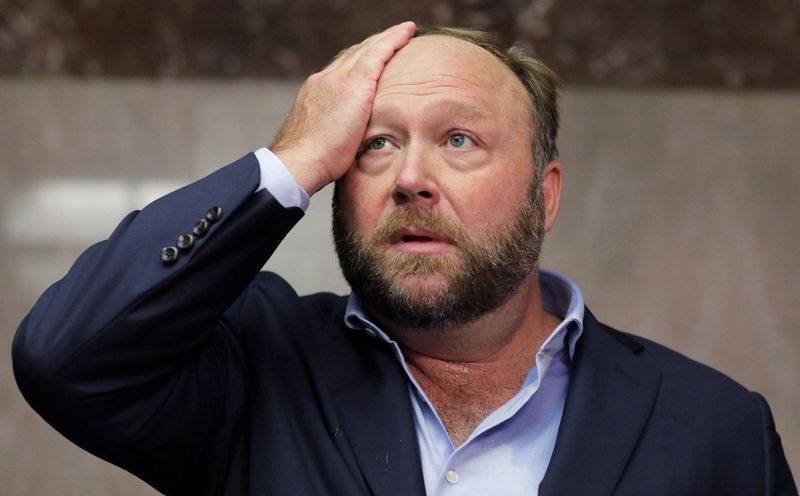 (Reuters) – Families of the 2012 Sandy Hook Elementary School massacre called for InfoWars’ bankruptcy to be thrown out of court on Friday, accusing the far-right wing website of seeking Chapter 11 protection for “sinister” purposes.

Lawyers for the families, who have won defamation lawsuits against InfoWars and its founder, conspiracy theorist Alex Jones, raised questions about the legitimacy of the bankruptcy at a hearing in Victoria, Texas.

They alleged the case was not filed for a valid purpose under bankruptcy law, but to force the families into settlements instead of proceeding with trials that will determine the amount of the damages they are owed for the defamation judgments relating to Jones’ false claims that the school mass shooting was a hoax.

A lawyer for a group of Connecticut families, Randy Williams, said he plans to ask the court to dismiss the case soon.

InfoWars holding company, InfoW LLC, and two other media assets owned by Jones filed for Chapter 11 on April 17 after Jones and his media companies were found liable in multiple defamation lawsuits brought in Texas and Connecticut by families of the shooting victims.

Jones, who has not filed for bankruptcy himself, has falsely claimed that the shooting, during which 20 children and six school employees were killed in Newtown, Connecticut, was a hoax fabricated by gun-control advocates and mainstream media.

The families have previously rebuffed Jones’ efforts to settle the cases. A trial to determine damages was scheduled to begin Monday in Texas but was halted as a result of the bankruptcy.

“Let me tell you, I think we have a sinister or unworthy purpose here,” J. Maxwell Beatty, who represents plaintiffs in the Texas case, said during Friday’s hearing.

U.S. Bankruptcy Judge Christopher Lopez, who is overseeing the bankruptcy, raised questions on Friday about the decision to file InfoW’s case under a bankruptcy provision that is designed for small businesses. InfoW lawyer Kyung Lee said he would explain at an April 29 hearing.

Lee also rejected the attacks on the bankruptcy, saying the case was filed “to preserve the means to pay” the families’ claims.

Marc Schwartz of the Houston-based firm Schwartz & Associates, who is expected to serve as InfoW’s chief restructuring officer, said on Friday that people involved with the case did not want Jones to personally file for bankruptcy because they didn’t want to harm the value associated with his name or “his ability to generate funds, to sell merchandise.”

A lawyer for Jones did not immediately respond to a request for comment.