There is nowhere in the world like this famous coastline, and no hotel on it – or anywhere else – quite like the Deetjen’s Big Sur Inn. The original ramshackle barn, clad in wisteria and Cécile Brünner roses, was built in the 1930s, predating the construction of Highway 1 itself. Opened as an inn in 1937 by a Norwegian immigrant and his Georgian wife, and co-managed for decades by an English widow, Deetjen’s still seems to radiate the gentility of all three cultures from its rough coastal-redwood walls (or maybe it’s the National Register of Historic Places credentials). Municipal tensions, fires and mudslides, and finally the pandemic almost put an end to it in 2020; but fans around the world rallied for it to be saved, and in May 2021, with a new ownership structure, it re-opened.

The rooms are spread throughout a smattering of cabins set back in the woods; some are ensuite; others share bathrooms (and so make good buyouts for families or friends – in particular the Hayloft Hostel, which sleeps nine in five bedrooms with two baths). Floors creak; the mornings can be chilly if your wood-burning stove has gone out; there is no room service. This is Old-California hostelry, and its charms are self-selecting; expect luxury of any conventional sort and you’ll leave disappointed (and frankly having missed the point). But dinner in one of the warren of candle-lit dining rooms, after a day spent hiking Pfeiffer Falls or Andrew Molera State Park, is impossibly romantic; and breakfast is a veritable rite of passage here. (The pancakes. To share. They’re huge.) From $130, deetjens.com

When Avi Brosh opened the second of his Palisociety hotels in Santa Monica, he reset the dial slightly on how Angelenos do small-scale, high-design accommodations that don’t cost the moon. Nine locations later – including Miami, Seattle and four more little Palihotels across the Los Angeles area – he’s full steam ahead, with addresses in Hollywood and a new brand, Le Petit Pali, coming online in 2023. Meanwhile, the newest Palihouse opened last year in Santa Barbara. While it’s not hard by the beachfront (for that there’s Hotel Californian, the Martyn Lawrence-Bullard-designed Moorish fantasy), the Spanish-colonial house it’s in is only about a five-minute walk from the Pacific.

It has everything you need from your chic weekend stay, realised on a super-intimate scale: jewel-box bar (three stools, a scattering of tables); small pool in the lush courtyard; cosy living room with big doors opening onto a veranda. No one of the 24 rooms is like another; some have balconies, some courtyard access, some compact little kitchens. The vibe is pure Santa Barbara – and the Palihouse ideally situated to explore it. From $450, palisociety.com

Point Reyes is where I used to escape to on weekends when I commuted regularly to San Francisco for work; under two hours’ drive north of the city on Highway 1, past Stinson and Muir Beaches, it’s dotted with little Victorian towns which, back then, harboured counterculture craftspeople (the founders of the now famous Cowgirl Creamery were just getting started) and today are bastions of low-key style, thanks to their proximity to all that Bay Area money.

Olema House, in the teeny town of the same name just south of Point Reyes Station, is a perfect base for exploring the hiking trails, oyster shacks, artisan boutiques and great restaurants in this part of western Marin County. The House itself is a fairly straightforward boutique-hotel situation, its rooms styled modern and warm, with lots of timber and slate. Go for Casa Olema – a one-bedroom historic-cottage bolthole, set away from the hotel down its own dirt lane; if you’re a loved-up couple, go for the Market Flat – a two-bedroom apartment above the local gourmet market, done up in a casual but cool NoCal-nautical style – if you’re a young family. From $351, olemahouse.com

Views, history and nature under the Golden Gate

Fort Baker is one of Sausalito’s great vantage points on the San Francisco Bay – a killer skyline view, an even better Golden Gate one, and easy access to both. The best thing about it: you can stay the night. When Cavallo Point – the hotel that now occupies part of the Fort’s grounds, which in turn are part of the protected Golden Gate Recreation Area – opened in 2008, it was good news all around for lovers of heritage buildings, green spaces, dog-friendly hosts and superb food (the award-winning restaurant Murray Circle operates in conjunction with the hotel’s highly regarded culinary school). 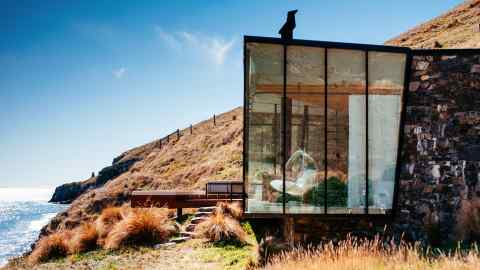 There’s new-build modern accommodation as well, but the suites in the Endicott-period former officers’ quarters have cornices, mullioned windows and other pretty details to spare. Wide lawns lined with Adirondack chairs lead down to the water, walking trails lead up into the Marin headlands in every direction, and a shuttle takes guests to the ferry dock, whence they can be in downtown SF in half an hour. From $690, cavallopoint.com

The chic end of Mendocino

Once upon a Gold Rush-era time, Newport was a logging town on the Shoreline Highway in the rugged and remote northern reaches of Mendocino County. The logs eventually went, the loggers soon followed; the ranchers and farmers who supplanted them ranged widely and built little. One of the farmhouses they left behind is today at the centre of The Inn at Newport Ranch, whose owners renovated the property and expanded the site over the course of the last 10 years. The coordinates feel pretty back-of-beyond, in the best Mendocino-County way.

Someone definitely knows what they’re doing design-wise: from the three rustic-sleek rooms in the main lodge to the two-bedroom suites, with their own miniature chef’s kitchens tucked under huge timber beams, in the Redwood House, the interiors combine raw and honest local materials, hand-worked and put together in warm, indulgent spaces. And then there are the endless ocean views out every window. From $600, theinnatnewportranch.com