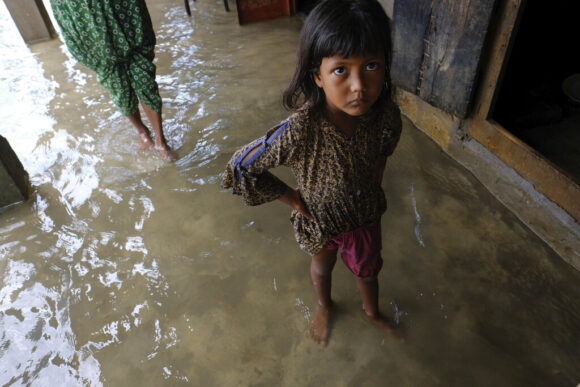 SYLHET, Bangladesh (AP) — Scientists say climate change is a factor behind the erratic and early rains that triggered unprecedented floods in Bangladesh and northeastern India, killing dozens and making lives miserable for millions of others.

Although the region is no stranger to flooding, it typically takes place later in the year when monsoon rains are well underway.

This year’s torrential rainfall lashed the area as early as March. It may take much longer to determine the extent to which climate change played a role in the floods, but scientists say that it has made the monsoon — a seasonable change in weather usually associated with strong rains — more variable over the past decades. This means that much of the rain expected to fall in a year is arriving in a space of weeks.

The northeastern Indian state of Meghalaya received nearly three times its average June rainfall in just the first three weeks of the month, and neighboring Assam received twice its monthly average in the same period. Several rivers, including one of Asia’s largest, flow downstream from the two states into the Bay of Bengal in low-lying Bangladesh, a densely populated delta nation.

With more rainfall predicted over the next five days, Bangladesh’s Flood Forecast and Warning Centre warned Tuesday that water levels would remain dangerously high in the country’s northern regions.

The pattern of monsoons, vital for the agrarian economies of India and Bangladesh, has been shifting since the 1950s, with longer dry spells interspersed with heavy rain, said Roxy Matthew Koll, a climate scientist at the Indian Institute of Tropical Meteorology in Pune, adding that extreme rainfall events were also projected to increase.

Until now, floods in northeastern Bangladesh were rare while Assam state, famed for its tea cultivation, usually coped with floods later in the year during the usual monsoon season. The sheer volume of early rain this year that lashed the region in just a few weeks makes the current floods an “unprecedented” situation, said Anjal Prakash, a research director at India’s Bharti Institute of Public Policy, who has contributed to U.N.-sponsored study on global warming.

“This is something that we have never heard of and never seen,” he said.

“We haven’t faced a crisis like this for a long time. Infrastructure must be constructed to cope with such disasters,” she told a news conference in Dhaka. “The water coming from Meghalaya and Assam has affected the Sylhet region” in northeastern Bangladesh, she said, adding that there is no quick respite for the country.

Hasina said that floodwaters would recede soon from the northeast, but they would likely hit the country’s southern region soon on the way to the Bay of Bengal.

“We should prepare to face it,” she said. “We live in a region where flooding happens quite often, which we have to bear in mind. We must prepare for that.”

A total of 42 people have died in Bangladesh since May 17 while Indian authorities reported that flood deaths have risen to 78 in Assam state, with 17 others killed in landslides.

Hundreds of thousands are displaced and millions in the region have been forced to scramble to makeshift evacuation centers.

Bangladesh, home to about 160 million, has historically contributed a fraction of the world’s emissions. Meanwhile, a decade-old deal for rich nations, who have contributed more to global emissions, to give $100 billion to poorer nations every year to adapt to climate change and switch to cleaner fuels hasn’t been fulfilled. And the money that is provided is spread too thin.

That means that countries like Bangladesh — whose GDP has risen from $6.2 billion in 1972 to $305 billion in 2019 — have to redirect funds to combat climate change, instead of of spending it on policies aimed at lifting millions from poverty.

“This is a problem which is created by the global industrialized north. And we are paying the price for it because they have ignored their responsibility,” Prakash said.

In the hardest-hit city of Sylhet, shop owner Mohammad Rashiq Ahamed has returned home with his families to see what can be salvaged from floods. Wading through knee-deep water, he said that he was worried about waters rising again. “The weather is changing … there can be another disaster, at any time.”

He is one of about 3.5 million Bangladeshis who face the same predicament each year when rivers flood, according to a 2015 analysis by the World Bank Institute. Bangladesh is considered one of the most vulnerable to climate change and the poor are disproportionately impacted.

Parul Akhter, a poultry farmer, held on to her disabled son to save him from the floodwaters in Sylhet. But she lost her only income — her chickens — and all other belongings.

“The chicken farm was the only way for me to live. I have no other means to earn,” she said.

Mohammad Arfanuzzaman, a climate change expert at the U.N. Food and Agriculture Organization, said that catastrophic floods like the one this year could have wide-ranging impacts, from farmers losing their crops and being trapped in a cycle of debt to children not being able to go to school and at increased risk to disease.

“Poor people are suffering a lot from the ongoing flooding,” he said.

About the photo: A girl reacts to camera as he family members inspect their damaged belongings at her home as flood water levels recede slowly in Sylhet, Bangladesh, Wednesday, June 22, 2022. (AP Photo/Mahmud Hossain Opu)

Copyright 2022 Associated Press. All rights reserved. This material may not be published, broadcast, rewritten or redistributed.