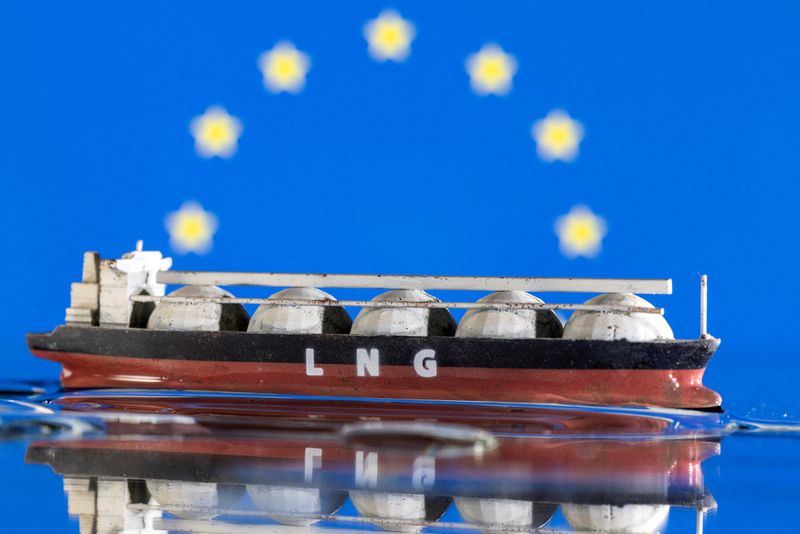 © Reuters. FILE PHOTO: Model of LNG tanker is seen in front of the EU flag in this illustration taken May 19, 2022. REUTERS/Dado Ruvic/Illustration

LONDON (Reuters) -Europe’s plan to get through a winter of difficult Russian gas supply with significant imports of liquefied (LNG) is at risk, with U.S. supply curtailed by a key plant outage, rising demand in Asia and soaring prices.

The region’s commitment to sever dependence on Russian supply due to its war with Ukraine has lead to heavy reliance on LNG imports, mainly from the United States, to meet targets on filling gas storage to 80% by November.

Countries are bracing for a potential complete cut-off from Russian gas with contingency measures such as increasing coal-fired power generation and LNG as supply via the Nord Stream 1 pipeline drops.

But the global LNG market has been tight due to a lack of new supply and reduced investment in recent years, with most major producers operating close to full capacity.

LNG prices jumped some 60% this week and are seen exceeding $40 per million British thermal units (mmBtu) soon. If the global backdrop tightens further, benchmark values will be within reach of record levels near $60 seen earlier this year, posing a serious challenge to Europe in maintaining imports.

Fire damage earlier this month at Freeport LNG’s Texas plant – a major supplier to European buyers – will keep the facility fully offline until September with only partial operation through year-end.

The outage at Freeport, which had been sending 70% of its cargoes to Europe, is expected to result in a loss of around 4-5 million tonnes this year, creating even more competition for the fuel source.

Europe has imported a record amount of LNG so far this year, 60% more than a year ago, helping to keep European prices at the Dutch TTF hub, the European gas benchmark, at a premium to the Japan Korea Market (JKM) price, used as an Asian LNG benchmark.

“There has been a growing imbalance between Asia and Europe, with European stocks growing at the expense of Asian inventories,” said Tamir Druz, managing director at Capra Energy.

“We expect LNG imports for the EU, Turkey and the UK over the second half of 2022 to be lower than what we’ve seen in the first six months, with a drop of about 16%, or 10 million tonnes,” he added.

Global LNG import capacity is almost double export capacity currently, but this could drop if the United States, which supplied 38% of Europe’s LNG in May alone, has other facilities taken offline during the hurricane season, which started in June and continues through to Nov. 30.

“Both TTF and JKM forward curves are in firm contango – where the LNG futures price is higher than the spot price – towards winter, with the spread narrowing sharply to around $0.60/mmbtu by January 2023, suggesting Asia will return to compete with Europe for cargoes,” said Kaushal Ramesh, senior LNG analyst at Rystad Energy.

“Asia is already in preparation for winter, with LNG vessels being snapped up on multi-month charters, as charterers fear being caught without shipping capacity during crunch months,” he added.

Japan also expects its power market to be extremely tight this winter in the event of cold temperatures and unforeseen outages at power plants, he said, which could raise LNG demand.

While there is a chance that Asian buyers may not compete fiercely for cargoes before the new gas year if spot market prices remain high, the capacity mismatch in Europe will remain a major challenge, said Victor Tenev, LNG business consultant at ROITI Ltd.

LNG terminals in Northwest Europe have been exceeding their nameplate capacity, or their maximum output, increasing the risk of failures and outages. Other terminals with higher capacity such as in Spain do not have an inter-connection with European neighbours.

“Heavily-loaded European regasification plants was and will be the momentum for the (cargoes to divert and) shift back to Asia, despite the price differential in favour of Europe,” he said.

The Nord Stream 1 pipeline which runs under the Baltic Sea from Russia to Germany, is currently running at 40% capacity with Russian gas producer Gazprom (MCX:) citing equipment problems. NS1 is expected to undergo maintenance in July.

Concern is growing about Europe’s ability to achieve its ambition to raise gas storage levels from 55% currently to a target of 80% before the key winter heating season.

“The current storage levels in Europe should suffice through November in the event of an immediate halt in Russian flows, but that means a severe winter crunch that could send TTF prices rocketing,” Rystad Energy’s Ramesh said.

Analysts expect European gas storage to be at 67% if Nord Stream continues to run at around 40% capacity by Nov. 1, and at 60% if it halts completely, both below the 5-year average.